Posted by ludorumrex on March 21, 2018
Posted in: Uncategorized. Leave a comment

Here’s the latest update, with a mix of new content and a new iteration of the battle resolution system with some pretty big changes. There are also bug fixes and various tweaks – thanks to everyone who reported issues, it is always very helpful and much appreciated.

Posted by ludorumrex on September 11, 2017
Posted in: Uncategorized. Leave a comment

Fortresses and Dungeons have gotten some attention this update, in addition to the some bug fixes, miscellaneous mechanics improvements and a few more battle spells. Full notes below.

Posted by ludorumrex on August 2, 2017
Posted in: Uncategorized. Leave a comment

Finally, the first major graphics overhaul is live! I’ll let the screenshots speak for themselves, and the patch notes can be found on Steam. There are also updates to the UI, the battle system, bug fixes, entirely new terrain types, and some more stuff. 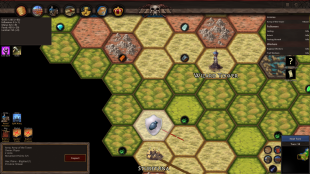 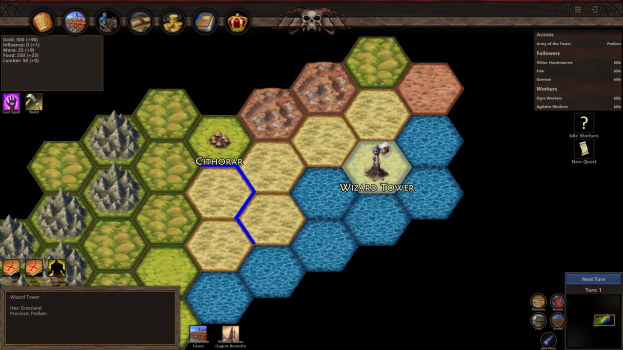 Shadows Behind The Throne

Posted by ludorumrex on June 8, 2017
Posted in: Uncategorized. Leave a comment

A fellow indie who goes by the moniker of Bobby-Two-Hands has put up a Kickstarter for his game Shadows Behind The Throne. I encourage you all to try out his prototype and back the game if you like the idea.

Posted by ludorumrex on May 18, 2017
Posted in: Uncategorized. Leave a comment

This is a small interim update with some important bug fixes, but also a few new spells, mechanics, and user interface improvements. The next large update will focus on battle resolution and is expected to be ready within a week at most.

Posted by ludorumrex on May 13, 2017
Posted in: Uncategorized. Leave a comment

Notes
Building on the new magic system, a lot of spells have been implemented, mastery can now be increased (unlocking new spells/units) and more research options have been added (units, spellcraft).

The update also has bug fixes (mostly related to the systems introduced in the last patch) and a couple of user interface improvements.

In the coming week focus will be battle resolution and battle magic. The next update should also feature improved visualization of research options, being able to see what options are not yet unlocked and what the prerequisites are. Finally, being able to copy blocks of text to the clipboard (for translation, bug reports, taking notes, etc.) is also planned to be enabled for all text areas/windows.

As previously mentioned a graphical overhaul of the map is also being worked on, but still in too early a stage for sharing.

Please note that there have been large changes to fundamental systems during the last two updates, and despite heavy testing, it is highly likely that there are still bugs lurking. These will of course be fixed as soon as possible when they are reported and/or found internally.

Posted by ludorumrex on March 27, 2017
Posted in: Uncategorized. Leave a comment

Pillage allows armies to plunder and/or raze resource sites (farms, mines, vineyards, etc.) This will result in loot and damage to the site – or complete destruction in the case of razing the site. Damage reduces production output (and plunder) and is repaired over time, with any dedicated worker units improving the rate of repair. Plunder is handled differently depending on what type of faction the army belongs to: the player (and rivals) will get the plunder as additional resources; nomads and marauders will have the loot assigned to the army. If another faction defeats this army, the plunder can be reacquired or looted (if was from a third faction originally). This will need to be tweaked, as it is somewhat odd that rampaging manticores will grab and carry around slabs of granite from a quarry after they’re done destroying and chasing off any workers. When the choice is given between plunder and raze – the mechanics behind the calculation of the effects are more explicitly stated than usual. This is part of the effort to make the game mechanics less opaque and make it easier to find bugs and imbalances.

Scouting is still in an early stage. Each army has a scouting value and a visibility value generated, based on the army composition and command. (These are not displayed in the UI yet). In this build you only get information on armies where you have an adjacent observer. The amount of information depends the stats mentioned above and can range from no info, to numerical estimates, to a full unit listing including size, etc. The scouting mechanics will be expanded in future updates. The information is shown in tool tips and the context panel.

[b]Warfare[/b]
[list]
[*] Armies can now have a Scout Captain to improve the scouting/reconnaissance ability of the army.
[*] Basic scouting mechanics have been implemented.
[*] Resource sites (farms, mines, etc.) can now be pillaged and razed. The mechanics modifying the loot and damage are shown in the event dialog to help make the results more understandable.
[*] Armies from non-civilized/settled factions will carry the loot from any pillaging, and it can be recovered/gained by defeating those armies.
[*] Major faction units can only replenish losses if adjacent to an owned or allied city, fortress or wizard tower.
[*] Units now replenish losses at half rate if they have moved.
[/list]

[b]AI[/b]
[list]
[*] Marauder AI is now capable of razing and pillaging resource sites.
[*] Wizard AI and Warlord AI now declare war on most aggressive actions taken against them, and will declare war themselves more often.
[/list]

[b]Misc[/b]
[list]
[*] The remnant armies of a defeated rival will no longer auto-disband. Instead each unit is either disbanded, becomes a marauder or joins the mercenary pool. The chance of each depends on the unit type. Only marauders stay on the map as army.
[*] Terrain type now affects food production of farms.
[*] All food values (production, costs, etc.) have been increased by a factor 20 to allow greater granularity of values.
[*] Independent settlements can now construct resource sites.
[*] In non quick-start games, the player can now force a certain race/culture to be generated in proximity to the player’ starting location. The player will also tend to start with units of this kind.
[/list]

[b]Bug Fixes[/b]
[list]
[*] Fixed “Worker Make Demands” event text to show the correct gold value (it was off by a factor 100). Made the demands a bit more reasonable at the same time.
[*] Fixed a bug where terrain changes due to the machinations of an Ancient Evil were only partially propagated to the game state, causing instability and inconsistencies in the UI and map.
[*] Fimbul Winters can now end (much to the relief of the poor inhabitants of affected provinces).
[*] The auto-buy toggle on the construction window now works as intended.
[*] Fixed issue with button text in Army window not being refreshed when it was reopened.
[*] Fixed a bug causing units to have increased upkeep costs if they have suffered casualties or have been split into smaller detachments.
[*] Fixed a bug causing requirements for conditional unit unlocks to not be listed. E.g. Minor Water Magic unlocks Nymphs for Faerie Wizards only. The UI made it look like the unlock was for all wizards. (non-Faerie Wizards need Advanced Water Magic).
[*] Most special factions (Ancient Evils, Dungeons, Organization, Nomads, Marauders, etc.) no longer pay unit upkeep, as they don’t have income and resources in the same way as Wizards and Warlords.
[*] Fixed a bug where new sites were not always discoverable by the player as expected.
[*] Fixed a bug where saving with an in-progress construction project in a City could break the game when loaded.
[*] Fixed a bug where units would not have their numerical strength capped properly, resulting in rather large numbers of monsters roaming the world.
[*] Fixed a bug where disbanded armies would end up in a bugged and non-interactive state, empty but still present in the world.
[*] Fixed units replenishing losses at a fixed rate instead of a portion of their max size, which led to small units instantly replenishing.
[/list]

Posted by ludorumrex on March 19, 2017
Posted in: Uncategorized. Leave a comment

This first post-Early Access update (discounting the emergency fix for issues affecting Linux and Mac) contains mostly Bug Fixes and User Interface improvements. It’s been a great experience launching the Early Access, and I’m truly humbled and actually a bit surprised at the reception the game has gotten. It’s been almost naught but intelligent, patient, encouraging and insightful feedback and bug reports. I hope to do this justice by delivering quality EA updates and eventually a great finished game.

The patch notes for 0.9.79 can be found on the forums or on Steam, so I won’t repeat them here, but instead focus on what is coming. There are two main areas that improvements will be focused on during the coming updates (apart from addressing the known issues and any new bugs that pop up):

There is little to no help for a new player when it comes to figuring out the UI, the goal of the game and what the mechanics are. Especially as it is not always obvious if a mechanic is fully, partially or not at all implemented.

A Steam user, AlguLoD, has been awesome enough to make a guide on Steam which goes through the fundamentals: http://steamcommunity.com/sharedfiles/filedetails/?id=886192013.

I’ve been adding tool tips and “NYI” tags (which indicate not-implemented mechanics and/or content) in some places for this latest update, and will continue to do so. But this is of course not enough, and there needs to be a proper tutorial-like experience for new players. Rest assured, this is very high on the priority list, but for this update I’ve had to focus on various game-breaking and/or very annoying issues.

To make the game more approachable while waiting for the tutorial to be added, I’ll do my very best to get a video up soon where I go through the various elements of the user interface and how to play the game. I had hoped to have this ready by now, but the work of getting .79 ready took more time than expected.

There are a lot of traits that need work, and I’ll try to do a mix of small, gradual improvements across the board combined with focused, bigger improvements of specific traits.

The Warlock Dark Pact mechanics will be expanded, building on the work done in a recent update. The Favor gained from completing quests will be translated into various gifts. The various actions required to complete the quests will also have a bigger impact on how the various factions view the Warlock. The diplomatic landscape should reflect that most cultures are not particularly fond of blood sacrifice, holy sites being defiled and dark powers being fed morsels of arcane energy.

On that jolly note, I will end this update. The next you hear from me should be a Video update with some guidance on how to play the game.

Posted by ludorumrex on March 14, 2017
Posted in: Uncategorized. Leave a comment

Posted by ludorumrex on March 8, 2017
Posted in: Uncategorized. Leave a comment

A small patch with mostly bug fixes, but also with two UI additions related to armies: Renaming of armies and tool tips indicating move cost and moves remaining when moving the mouse over the map with an army selected.